The COVID pandemic has put a halt on numerous practices that we considered normal. Unfortunately, speeding does not seem to be one of them. Data published by Geotab reveals a considerable increase in vehicle speeding in most cities in the country. This does not bode well for road safety. The primary reason for an increase in average speeds is people’s reluctance to step outdoors, which has led to fewer cars on roads.

Geotab reports that the country has seen an increase in average vehicular speeds in New York City, San Francisco, Washington DC, and a few other cities. The average rate in the country has gone up by 16 percent. New York leads the way among cities that have witnessed a considerable increase in average vehicular speeds. As the above graph indicates, New York has seen a rise of 20 percent, while San Francisco and Washington DC have seen an increase of 19 and 17 percent, respectively.

A Decrease in Congestion:

On the flip side, we also see a massive decrease in congestions. The time spent at intersections from the period between Feb 22- Mar 15 to Mar 15- Apr 10 has come down drastically. Atlanta has seen the most considerable reduction in time spent at intersections with a decrease of 17 percent. Los Angeles, New York City, Washington, D.C, and Chicago round up the top five. Los Angeles saw a decline of 14 percent, while New York City and Washington, D.C saw a decrease of 10 percent. 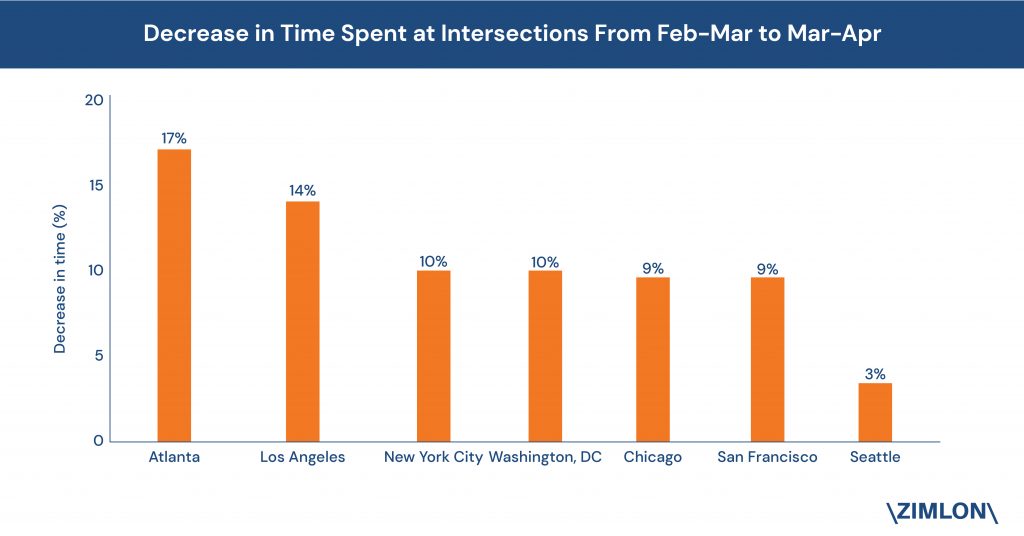 This pandemic period has taken away a large chunk of vehicular traffic off our roads, which can prove to be advantageous on numerous levels. For starters, it has helped in improving visibility and providing us with cleaner air. It has also led to a smoother flow of traffic. But, this method of reducing traffic is not ideal or sustainable in the long run.

Zimlon is a data-driven insurance research enterprise dedicated to helping property owners choose the best insurance agency according to their needs. It keeps an eye out for various factors that could affect property insurance rates.