The ongoing pandemic has made everyone rethink their life choices. Businesses have been forced to adopt different strategies if they are to sustain in the market. The same applies to entities working outside the boundaries of the law. There have been some drastic changes in the crime rate across the country. While the country’s overall crime rate saw a significant drop, domestic violence and gun violence have increased substantially in many of the states. There have been 310 mass shootings reported till July, which is a 34% increase compared to the previous year within the same time frame. This has accounted for more than 22,000 deaths and 19,000 injuries. Law enforcement agencies have cited it to the frustration built up over the unemployment crisis, and people locked-up indoors. On the other hand, drug crimes saw the most significant decline, with 63% compared to the previous five years, followed by property crime and violent crime with 19% and 15%. vHome Insurance analyzed the country’s burglary rate during the pandemic and identified the cities with the most significant drop in burglary rate. 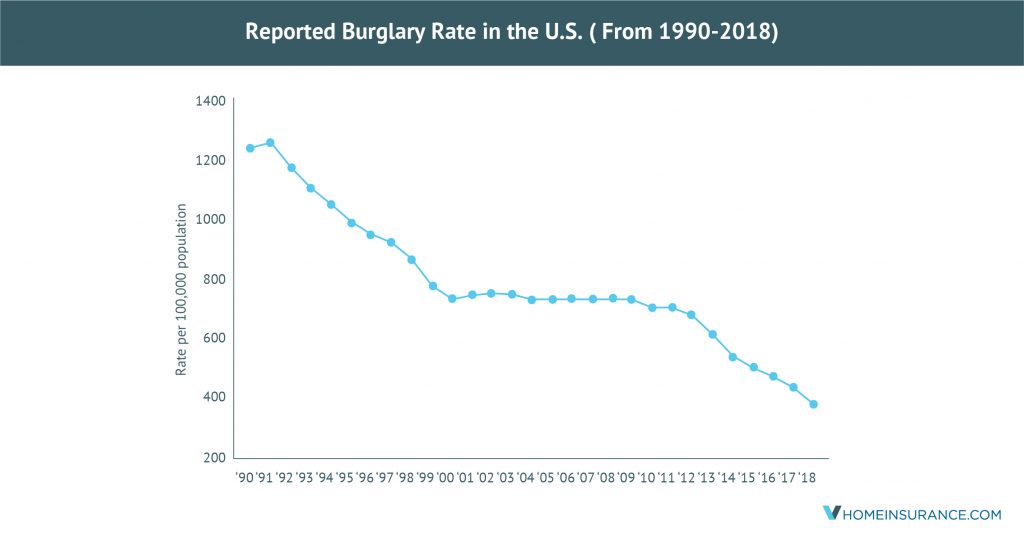 Cities with the highest decline in burglary rates

Historically, the percentage of burglaries has been gradually decreasing over time. The rapid development of home security devices and surveillance techniques has significantly contributed to reducing the number of burglaries. According to the FBI’s 2019 Semiannual Uniform Crime Report, the burglary rate saw a decrease of 11.1% percent compared to the previous year. From thereon, there has been a significant decline in the percentage of burglaries from the onset of Covid-19. Residents staying indoors have made it near impossible for burglars to break-in to houses. Most noticeably, Baltimore witnessed the highest percentage of decline, with 36.5%, followed by Detroit with 32%. Other major cities, including Washington, New York, and Los Angeles, saw a decrease in burglaries’ percentage with 23%, 18%, and 10%.

Cities with the highest increase in commercial burglary rates

Cities with the highest increase in overall burglary rates

As opposed to the nation-wide trend, some cities have also marked an increase in the burglary rate. For example, Boulder has seen a whopping 189% rise in burglaries’ percentage since the beginning of March. The city has registered 79 burglaries so far this year compared to 28 burglaries in the previous year. The numbers are a mix of commercial and residential burglaries. While the Boulder police department has not revealed the exact numbers, it is safe to assume that commercial burglaries would have been the driving factor in increasing the overall burglary rate. The state of Arizona has also witnessed an increase in the percentage of burglaries with 13%. Other cities such as Seattle and Cincinnati have also reported a rise in burglaries with 21% and 2.5%.